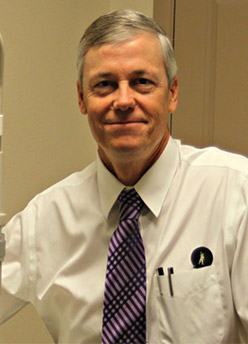 Dr. Robert Sheets was born and raised in North Dakota and acquired his Bachelor of Science degree from the University of North Dakota. It was in those early years that he developed his passion for helping the public and was accepted to Pacific University College of Optometry in Oregon. Upon completion of his Doctorate of Optometry, he was drawn to West Texas to begin his career. Now considered an adopted Texan, Dr. Sheets has been practicing in Midland for over 25 years and has served as past President of the West Texas Optometric Society. In order to stay current in developments in optometry, he completed additional training in the treatment and management of ocular diseases at the University of Houston and received his Ocular Therapeutic Certificate as well as his Optometric Glaucoma Specialist Certificate. Additionally, he is one of a few to become a Fellow of the American Academy of Optometry.

Dr. Sheets has also been involved with laser eye surgery from its inception, taking him to Toronto, Canada to mentor under laser pioneer Dr. Raymond Stein. Eye Lasik Midland, housed inside Vision Health Specialties, continues to be the leader in laser eye surgery for the Permian Basin. He also serves as Treasurer for his local church. Robert and his wife Dolores have been blessed with Madison, their only daughter. During their free time, you can find the Sheets at sporting events, on the golf course, or traveling.

Vision Health Specialties is located in the heart of Midland, TX serving the West Texas area, such as Odessa, TX and Big Spring, TX....
Read More

We are a proud provider of Vision Service Plan (VSP) and many other insurances. Read more

If you're ready for an alternative to glasses and/or contacts look to us for co-management of LASIK, cataract, and other ocular surgery.

Scleral lenses are specialized contact lenses that make contact lens use possible for many people for the first time - and they have advantages for normal contact lens wearers as well.